Creating the most efficient character is a very important aspect in Conan Exiles. Over time, we noticed that some characteristics and skills are often used by players, while others remain unclaimed. We thought for a long time about how to improve the character development system, and as it turned out, Age of Sorcery served as a good opportunity to implement this.

In the Age of Sorcery update, we set ourselves three priority goals: firstly , to significantly balance perks and attributes to increase their demand in any of the builds; secondly , to integrate magic in a way that suits the game’s lore; and third, make character development more flexible.

It is worth noting that changes to attributes and perks directly affect all aspects of the game, such as: combat, slaves and pets, resource gathering, and the like. In addition to the update, we’re giving you the ability to change your attributes by providing additional perks that are geared towards magic.

We will talk about the changes that affect overall progression, then we will move on to specific attributes and their properties, and finally to Corruption and the unique new perks that are associated with it, as well as the price that will have to be pay those who decide to use the dangerous knowledge of magic.

MAIN PROGRESS AND SIGNIFICANCE OF CHOICE

In Age of Sorcery, we have reduced the maximum amount of attribute points you can earn from 390 to 60. In addition, each attribute now has a maximum of 20 points, and there are no additional costs as you level up. Thus, each point invested in one of the attributes will give a significant increase. 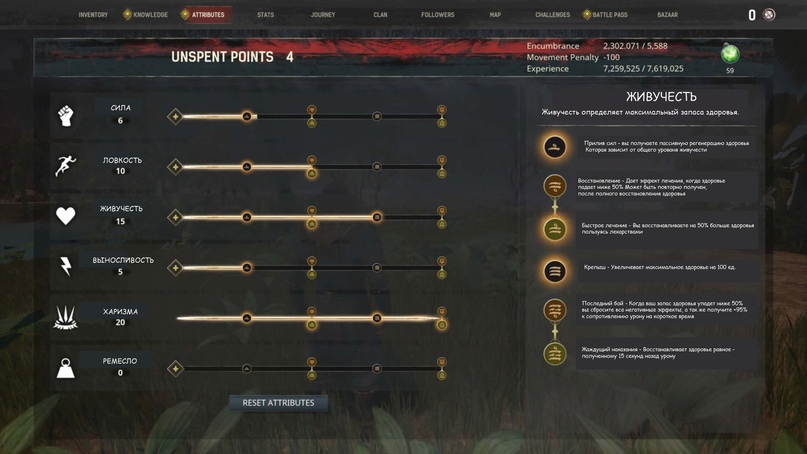 We want players to try out different builds and perk combinations to make a unique character. As soon as we add magic, the variety will become even greater. We will demonstrate this soon.

We have some really cool new skills coming to Age of Sorcery. Let’s look at a few examples. One of the benefits of a 20 point agility boost is a glancing blow. In more detail, your first attack after dodging does not consume stamina and also deals more damage.

The Builder skill makes all structures you build more durable, while the Prepper skill extends the life of your tools and greatly reduces your hunger and thirst. 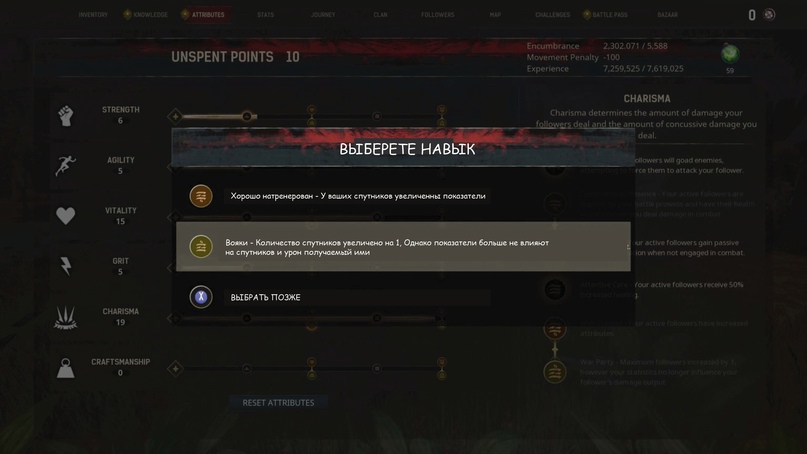 The Shield Mastery skill allows you to block unblockable attacks but increases the stamina cost of blocking, and your speed becomes twice as fast after a successful block. There are many more brand new benefits, so be sure to explore all the possibilities and combinations.

Thanks to the new attribute system of 20 points, you will be able to pump up to a maximum of three attributes, which was previously impossible. You can also freely distribute your points across more attributes by choosing different skills, this way you increase your versatility.

As you can see in the list below, Accuracy, Endurance and Survival have been replaced with new attributes. The effects of all attributes have also been changed.

► Strength: You fucking bull. you have no equal in battle! Melee weapon damage increased and you can carry more cargo

► Agility: Increases the damage of ranged attacks, as well as increases accuracy and speed

► Charisma: Knocking out a slave is now a trifling matter! In your company, all followers deal more damage

► Endurance : A healthy mind in a healthy body! Increases stamina in combat

► Experience: Some destroy, some build. You do both. Increases carry weight.

In Age of Sorcery, you will be able to use a lot of witchcraft spells, but these abilities come at a cost. Only those touched by corruption can control such dark knowledge, and it’s easy to spot it: hungry eyes looking out from emaciated faces; blackened veins, webbed feet, withered skin and atrophied muscles.

To own magic, you need sacrifices, you will absorb damage in yourself in order to curb this secret knowledge! With each appeal to magic, you lose part of your essence, and defile your soul. The more bad a player has, the less health and stamina he has. You can only sacrifice half your health and stamina, and in doing so, no amount of sorcery will be beyond your reach.

The next step on the road to defilement is self-sacrifice. In Age of Sorcery, you can taint your strength, vitality, and charisma to gain completely new abilities, but you’ll need Soul Essence to do so. You can get it by sacrificing at the sacrificial altar by bringing a person there and tearing his soul out of the body, only dust will remain of him, and you will become the owner of the Essence of his Soul.

Corrupted Skills are acquired at the same time intervals as Normal Skills and replace the previous Normal Skill. Each fel point spent after the first skill in a particular attribute increases the power of that skill.

Damaged skills only show up when you meet their requirements. It’s worth noting that Corrupted Skills are not directly related to casting Affliction. For example, if you corrupt your power, you will get a skill that increases your damage beyond the limits of normal power, you will pay the price of your maximum health and stamina.

Corruption can be removed by being near a Slave Dancer, but if you have corrupted your attributes, your Corruption will be locked to that level and can only be cleansed by resetting your skills.

Street Fighter – Who is E. Honda?

Hackers cracked Battle.net security because of resentment against Blizzard